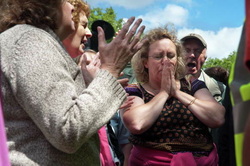 THE GREATEST REVIVAL KNOWN TO MAN WILL BE SEEN ON THE STREETS,
OUT IN THE HEDGES AND THE HIWAYS. IN THE MARKETPLACE, OUT WHERE THE PEOPLE ARE.
IN 1982 JUST SHORTLY AFTER I WAS BORN AGAIN, I HAD AN OPEN VISION.....
In the vision.. I saw people out on the streets. They were clustered in separate groups, but were unified. The atmosphere was charged with God's presence. GOD was everywhere! You could see His presence coming on people.They were praying with tears in their eyes, asking Jesus into their lives. A group here, and a group there , they were  all praying for people right on the steets. One man was on his knees, weeping and crying while they were praying for him. Some were standing and singing praises to God.with hands lifted high, and the glory of God was on their faces.You could look across the street and see others praying for people's needs, and they were being miraculously healed. JOY , EXCITEMENT,was EVERYWHERE!! THE ATMOSPHERE WAS CHARGED WITH GOD'S PRESENCE!!EVERYONE WHO WAS ON THE STREETS WERE MOVED BY A CERTAIN SOUND THAT THEY ALL HEARD CORPORATELY.NO ONE WAS TOLD BY WORD OF MOUTH TO GO TO THE STREETS... IT WAS A CERTAIN SOUND EVERYONE HEARD AND WENT.